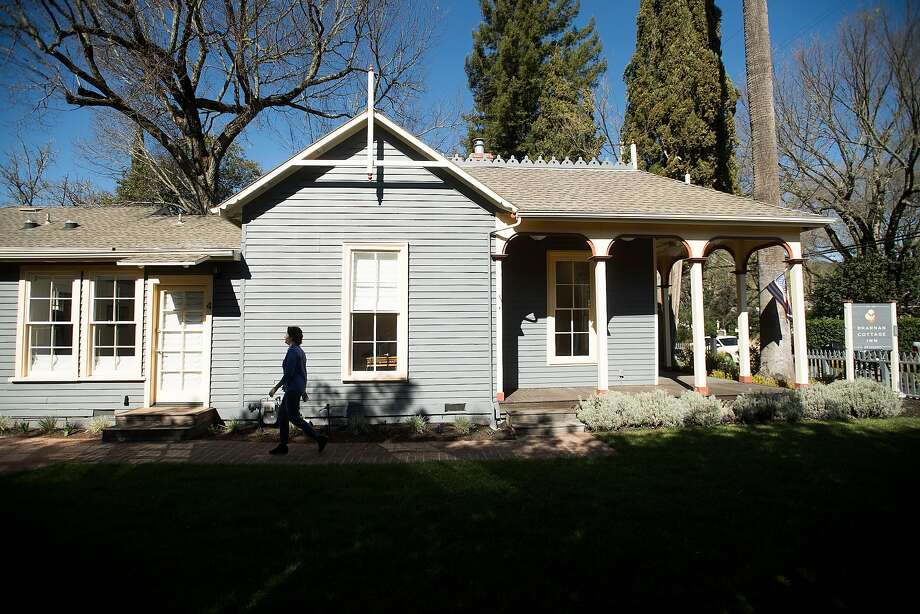 Photo: Noah Berger, Special To The Chronicle
IMAGE 1 OF 4
Eden Umble, marketing and hospitality director for the Brannan Cottage Inn, walks past the hotel’s main building.

For about 36 hours last fall, Napa Valley hotelier Amar Patel thought he might lose nearly everything. Wildfire threatened Calistoga, home to two of the three Napa hotels owned by his Anvaya Group, and his own neighborhood in Santa Rosa was under a voluntary evacuation order.

“I couldn’t eat, I couldn’t sleep,” he recalls. “I was waiting for any sort of news.”

Although fires consumed Patel’s son’s preschool and some of his friends lost their homes, Calistoga was largely spared. So were the historic Brannan Cottage Inn, which Patel had recently restored, and the UpValley Inn & Hot Springs, the first hotel his family had ever built. UpValley led Patel and his relatives to prominence in Calistoga at a time when Indian hotel operators were rare in Northern California.

“We’re Gujarati Indians, and hospitality is our thing,” says Patel, who shares his surname with many nonrelatives in the industry, including the managers of the UpValley and Chablis inns. “Countrywide, ‘Patel’ is synonymous with hotels, so it’s in our blood.”

The family business got its start in the 1970s, when Patel’s father Chan and three brothers moved from Kenya and England to Monterey, and bought what’s now a Comfort Inn on Fremont Street in Monterey. Then in 1987, when Patel was five years old, his father commuted from Monterey to Calistoga four days a week to build the 55-room UpValley hotel, which then was a Comfort Inn. Once it opened, “when a manager would leave, we would come live up there for several weeks at a time.”

By the 1990s, the family’s properties ranged from Dana Point to Fort Bragg, and Patel’s father established the Anvaya Group. “That’s how we ended up focused on Calistoga,” Patel says. Today the Anvaya Group has four other lodgings in Calistoga, and also owns the Chablis Inn in Napa and two hotels and vacation rentals in Seaside, Oregon.

“This is the main attraction — the hot springs,” he says. “The whole point of Calistoga is based on wellness and the mineral water that’s unique to our area.”

A few blocks away, the six-room Brannan Cottage Inn also offers testament to that legacy — and the family’s hard work. Its main building is the only one of the 15 cottages of the Calistoga Hot Springs Hotel, opened by Sam Brannan in 1862, that remains on its original site. When the Anvaya Group bought it in 2013, it was a bed-and-breakfast but “in terrible condition, just dilapidated,” Patel says.

With the help of designer Staci Giovino, modern interpretations of Victorian wallpaper now frame the Frette duvet-covered beds, bracketed by headphone jacks and USB ports in ornate switch plates — so one guest can watch Netflix on the large flat-screen TV without disturbing the other, Patel explains. For breakfast, pour-over coffee, local pastries and made-to-order smoothies await in the drawing room, where light pours in through the original 7-foot windows.

“The level of detail, care and resources he put in to restore it in a modern way to its glory was absolutely fantastic,” says Canning.

Noting he’s “really fortunate” not to have lost properties to wildfire, Patel says he plans to keep building on his family’s — and Calistoga’s — reputation for tourism. “It’s very stiff competition, so everyone is improving all the time,” he says.

Jeanne Cooper is a freelance writer who frequently covers California for The Chronicle. Email: travel@sfchronicle.com